1970  (December)
In the week before Christmas two young apprentices from EMI, John Mandrak and Steve Jones, decided to broadcast some Christmas carols and messages to the patients of Hillingdon Hospital. It was a pre-recorded broadcast by using a Reel to Reel Tape Machine plugged into the hospital bedside radio system.

The idea to brighten up the patients time in hospital came from another EMI employee, Alan Hardy, who was at that time running a similar service at the West Middlesex Hospital. With a station called 'Phase 3' ceasing to broadcast at Hillingdon Hospital in previous months John and Steve had permission from the hospital management to fill the void. (Photo - first station Logo by Bob Barton)

During 1971 a weekly programme of requests was broadcast live each Sunday with the equipment placed in a store room at other times, freeing the rest room for staff. Later in the year the word Hospital was dropped from on-air announcements. We have been known as Radio Hillingdon ever since. (Photo - John Mandrak, Gerald French and David Brown as they appeared in the local Middlesex Advertiser and Gazette in 1971).

1972
We moved to a small Electricians Shack at the end of the Annex wards and built a very small studio within the building. This was Radio Hillingdon's first permanent home and allowed an increase in programme hours and the addition of Wednesday evening broadcasts. (Photo - Mike Hind in the small studio in the electricians shack with Special Guest Dave Cash).

1978  (3rd June)
Radio Hillingdon's first Summer Fete was held on the fields owned by the Hospital located behind the old Hospital Laundry building. This was to become an annual event and a major source of fundraising for many years.

1978  (December)
Additional funds from the Summer Fete allowed the purchase of new equipment for both Studios and the complex was then officially opened by Henry Cooper OBE. (Photo - Henry Cooper in Studio 2 and David Brown in Studio 1).

1980
Radio Hillingdon celebrates its 10th Birthday with a party and a cake.

1992  (April)
A new Studio 1 is launched on Election Night! With on-the-spot reports from across the borough using the new high-tech equipment.

1994
Radio Hillingdon enters fund-raising float into the Hayes Carnival and volunteers dress as Doctors and Nurses, with a Patient in a Hospital Bed listening to Radio Hillingdon.

1996
A young Chris Green (age 10) tests out the controls in Studio 2 with no Digital Technology in sight - Chris now in his 30's is Head of Music and Output, looking after the Station Imaging, Music and Programme Schedule.

1997 / 1998
Broadcasts commenced on Low Power AM on 999am. This enabled patients to hear Radio Hillingdon on their own transistor radios on the main wards. Shane Ritchie launched the AM Service and the station branding was updated to 999am Radio Hillingdon. (Photo - Shane Richie outside the studio after launching our 999am service)

1999 / 2000
Two new professional built Studios were installed, the first time the station had studios with identical equipment for ease of use, maintenance and training. 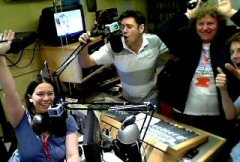 2010  (April)
Radio Hillingdon starts broadcasting on the Internet - the first time the broadcasts can be heard outside the Hospital buildings. The service was officially launched by the Chief Executive of the Hospital Trust, David McVittie (pictured "cutting the tape")

2014 / 2015
Both Studios were completely upgraded to facilitate a more ergonomic layout for multi presenter programmes and to accommodate programmes with more guests. The new studio equipment also made the switch from analogue to digital desks, bringing more flexibility and reliability. (pictured Claire Heath & Divya Sachdeva in the new studio 1).

2015
Boris Johnson visits Radio Hillingdon, whilst running for M.P. of Uxbridge and South Ruislip. Boris told Chairman Steve Hickman how impressed he was by our studios and jokingly remarked that they were better than Radio 4's.

2015
The vinyl record library is sold to one of our members. A new digital library has replaced the vinyl. The Library can now be used to hold Committee meetings, training and show preparation.

2016  (September)
Radio Hillingdon Volunteers embark of a 125 Broadcast Marathon. 15 volunteers each broadcast for 25 hours non-stop, raising £15,000 which is split between Radio Hillingdon, Mount Vernon Cancer Centre and the Make a wish foundation.

2017 / 2018
The rest of our studio audio network is updated to a fully digital one. This lifts the quality level of our output to the hospital and the internet, as well as making the system easier to maintain remotely. This came in handy when Covid-19 hit us in 2020.

2019  (May)
Four volunteers are interviewed by BBC television for the Points of View programme.

2020  (March)
Due to the Covid-19 Pandemic Volunteers are forced to present programmes from home by using Myriad remote voice tracking software, which kept Radio Hillingdon on the air with record requests continuing to be broadcast.

2020  (August)
Radio Hillingdon launches a new logo based on the original one with a modern twist to celebrate our 50th Anniversary. The original Logo is shown at the top of this page.