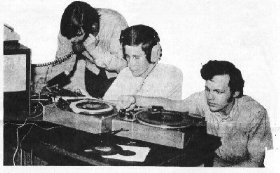 Staffed by three 18-year old EMI Apprentices L to R John Mandrak receives a request for a record over the internal telephone, extension 430, whilst Gerald French does the broadcast assisted by David Brown.

We've been broadcasting since 1970!

On the Sunday before Christmas in 1970 two young apprentices from EMI, John Mandrak and Steve Jones decided to broadcast some Christmas carols and messages to the patients of Hillingdon Hospital, using equipment set up in a staff rest room. The following month (January 1971) three more EMI apprentices joined them, David Brown, Gerald French and Pat Flaherty and Radio Hillingdon was born.

The idea to brighten up the patients time in hospital came from another EMI employee, Alan Hardy, who was at that time running a similar service at the West Middlesex Hospital. After this initial launch, a weekly programme of requests was broadcast live each Sunday Evening.

A short time after this, Radio Hillingdon set up a small studio in an electrician's shack where evening and weekend programmes were broadcast. Eventually, the shack needed to be demolished to make way for hospital expansion and the Hospital provided a brand new, purpose-built complex which was officially opened by Henry Cooper OBE in December 1978. This is still home to Radio Hillingdon today.

Visit the Radio Hillingdon Early Years Website for a nostalgic look back at the stations history.

Hospital Radio Hillingdon © 2021. All Rights Reserved.
Thanks to WowThemesNet for the use of their template.