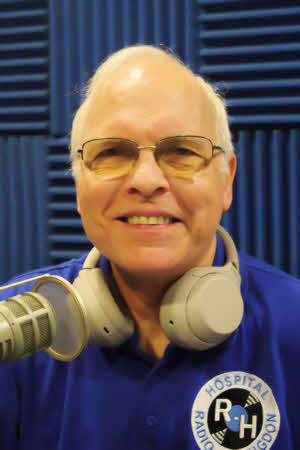 I'm David Brown and a founder member of Radio Hillingdon. I presented programmes from 1971 to 1983 and was also part of the station's Engineering Team from 1971 until my daughter was born in 1986. 24 years later I returned to make a special 40th Anniversary programme which explained how Radio Hillingdon started and showed some of the hurdles we had to jump to keep the station on the air.

I enjoyed making this special programme and it got me hooked again, so I am currently presenting the Wednesday Night Late Show each week.

The Late Show is two hours long starting at 10pm and has a mixture of general music with my Featured Artist Double Play and Mellow Three in a Row.

I've also been running the Radio Hillingdon Early Years website for many years and took over this main Radio Hillingdon site in February 2011 when I designed and wrote the software to generate the Electronic Programme Guide and the ON NOW and ON NEXT automated Picture and Description system to show who is broadcasting now and who will be on next. I updated our website in March 2018 to give it a more modern look and so it was easier to view on small screen devices.

If you like Dance, Smooth and General pop music and you find yourself in Hillingdon Hospital, join me for free on the Hospedia bedside radio system.

If you are at home or are visiting the hospital listen in on our internet streaming service by clicking the Listen Live option in the top left hand corner of our website or use our Mobile App. This can be downloaded from your App store, just search for Radio Hillingdon. You can also listen at home on your Smart Speaker by saying "OK Google Play Radio Hillingdon" or "Alexa Play Radio Hillingdon".