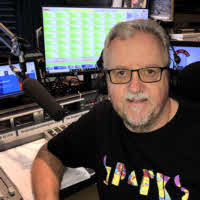 "Write a few words about yourself for the website" they asked! So, here’s a few to tell you all about me! I started my part time radio career when I was in the Royal Air Force. Luckily my first two postings, High Wycombe and Gutersloh in Germany both had their own radio stations run along the same lines as our hospital radio service. I finished my RAF service at Northolt, and as there wasn’t a radio station there, I joined Radio Hillingdon. That was back in 1984! Since then I’ve presented many different programmes. Saturday morning magazine shows, late shows and currently I present the “Number 1’s at 1” which is on air Tuesday to Friday at 1pm, and I also present the “70’s Rewind on Friday evening 9-10pm with a repeat on Saturday at 6pm.

As well as presenting I spent quite a few years as our treasurer, and I’ve been part of the Engineering Team from almost day one. In fact, I’ve helped to install the three studio upgrades that we’ve carried out over the last 35 years. From all analogue to all digital. Hospital Radio gave me a small break into commercial radio, and I spent a while as a freelance presenter on 210FM in Reading and on Airport Information Radio based at Heathrow. I’ve just retired from my final workplace, the BBC World Service, after almost 25 years so hopefully I’ll have more time to spend at Radio Hillingdon.

Music wise, I love the era of the ‘70’s. Slade, Sweet, Queen and Sparks are some of my favourite bands from that era. In the ‘70’s Rewind I try to play not just the big hits from the decade but those songs that were played on the radio but never made the charts, the turntable hits. I hope you enjoy listening to Radio Hillingdon and hopefully you can join me for the Number 1’s at 1 or the ‘70’s Rewind.